From lenses to labour

After meeting on a night out with mutual friends, a romance blossomed between myself and my wife Lisa. One day, Lisa came to meet my mother and when my mother saw her she said, “Lisa, Lisa Fennessy? Hold on and I’ll get my photo album!” Low and behold, my mother pulled out the photo from my fourth birthday party and there was Lisa in the picture amongst all my friends. Turns out we were childhood neighbours all along! Nine years later, on New Year’s Day 2016, I married the love of my life.

The same year in November, we found out the we were expecting our first, a little girl. After the initial excitement we sat down and figured out when the baby was due- August, smack bang in the middle of the busy wedding season. Being a wedding photographer, panicking I made a jump for my phone to see what I had booked around the time of her due date on August 10:  a wedding, three photobooths and two christenings.

The week after was another busy week. A wedding on the Wednesday 16th in Limerick and another on the Aran Islands on Friday the 18th for a wedding on the 19th and not home until the Sunday 20th.

“Sure she`ll be here by then, that’s over a week after your due date.” my famous last words.

As the due date came and went, I realised that I would be hours away if anything were to happen that weekend. Lisa was booked to be induced on Sunday, August 20th, and I knew I would be home from a wedding on the Aran Islands by then. I wanted to spend the night before at home getting ready for the hospital. I made the bride and groom Siobhan and Ger aware that Lee, a friend of mine, would be manning their photobooth as my wife was due a baby and they couldn’t have been more understanding.  The plan originally was that I would be getting off the island on the last ferry at 6.30pm. I would have the majority of their wedding shot at that stage and Lee would cover the first dance and start the photobooth.

On the morning of the wedding, I got the text I was dreading from Lisa: “I’ve been having contractions since 4.30” I tried to keep it quiet as I didn’t want the bride or groom worrying.

The wedding day went amazing. At this stage Lee was making his way to the island after a call from Lisa, allowing me to leave once the location photos were finished and get the 5pm ferry back to Galway.

Once the ceremony was finished we jumped into the van with Niall, the manager of the hotel and headed for the cliffs and beach at the far side of the island for some stunning location shots. It was on this journey the bride asked me how Lisa was doing.  They couldn’t believe it when I told them she was in labour since this morning.

Myself and Diarmuid, the videographer got some amazing footage of the couple on the windy and wild coast and then headed for the hotel at 5pm. Niall had one of the staff on standby in a van waiting to get me down to the ferry once we got back. The bride and groom wished me the best and asked me to keep them updated later that evening. It was the fastest handover of cameras ever with Lee. The ferry was full but once the crew heard what was going on they made sure to get me on it.

A 45-minute boat trip, followed by two hours in the van, all the while being told my wife was refusing to leave the house until I got there, made for an interesting journey home.

When I pulled up outside the house, friends and family were there with Lisa cheering that I made it and delighted that we could now head to the maternity hospital. At 4.32am on Sunday morning Hazel Clancy was born with her mom doing great, Hazel doing great and dad delighted that he made it for this amazing experience.

The following morning, we sent Siobhan and Ger a photo of the three of us and thanked them for being so understanding. They were delighted that I made it and we were all together.

One of the main things to come from this story for me, is that people are awesome. From the bride and groom and bridal party, Niall and the staff of the Aran Islands hotel, Lee and Diarmuid to the crew of the Aran Island Ferries, just amazing.

The Brides of Limerick team would like to say a huge congratulations to Tony and his wife Lisa on the birth of their beautiful baby girl Hazel.

Welcome to the world Hazel Clancy 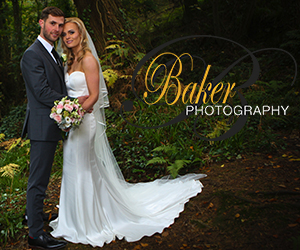